With fading light, the last of the Track League Championships was squeezed into a very packed programme at the final meeting of the year. There were some surprises but also some favourites coming through.  The surprises came in the Keirin Championship and the Team Sprint Championship where the much fancied Peter Hansford RT riders lost out.  In the Kierin Final it was Alex Jolliffe (Poole Wheelers) who took an early flyer once the derny had departed and was chased home by co-escapee Stuart Morton (Hargroves Cycles) with James Brightwell (Bournemouth Arrow CC) snatching third ahead of the trio of Peter Hansford riders.  In the Team Sprint Championship a couple of dry runs on their Club night paid off for the Bournemouth Arrow team of Barrie Watkinson, James Brightwell and Paul Richardson who squeezed a win by 1.64 secs over the Peter Hansford RT of Alistair Fielding, brother Harrison and Oliver Hitching. Favourites Rebecca Raybould (Poole Wheelers) and Charley Calvert (Bournemouth Arrow CC) won the Women’s and Youth event respectively, but not without each having to overcome some spirited riding from club mates Rebecca Hurst and Josh Gamston.

Credit should also go to the Youth and Women riders who completed their programme each with the Revenge 6 lap event only for most to go straight into the Season Finale 8 KM Open Scratch for the inevitable mauling normally described by coaches as character building. The event outcome was the resumption of normal service. Showing no ill effects from a busy few days at the National Championships, not to mention a hectic last hour of racing, it was Harrison Fielding who forced the win in the face of fierce competition from Alex Jolliffe with many other riders suffering leg fade at the end of a pretty brutal but fascinating evening’s racing. 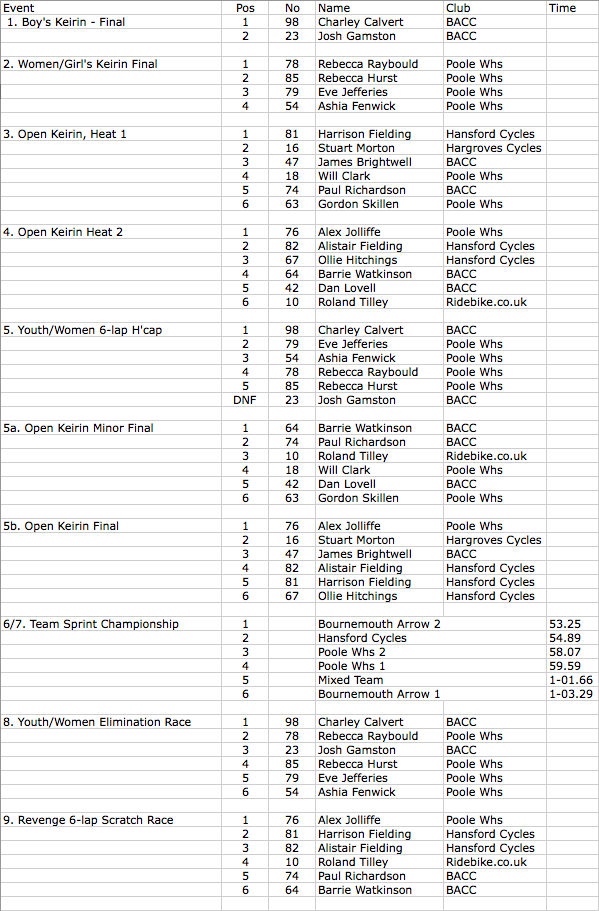 This entry was posted in Raymond Brown Track League. Bookmark the permalink.